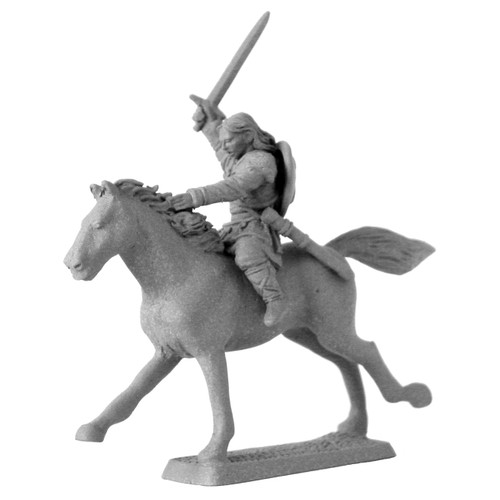 Ancestor of the mearas - the great horses of Rohan. Felarof was a beautiful white horse and he was strong and swift and proud. It was said that Felarof came from a line of horses whose sire was brought to Middle-earth from the Undying Lands by the Vala Orome. Felarof was a wild horse. As a foal, Felarof was captured by Leod of the Eotheod, who lived in the north near the source of the Anduin. When Felarof was fully grown, Leod tried to mount him, but the horse threw him. Leod struck his head and died, and his son Eorl vowed to avenge his death.

Eorl tracked Felarof down and called to him, and the horse came. Eorl said that Felarof owed him a weregild - meaning compensation for his father's death. Felarof was able to understand the language of Men, and he submitted to Eorl and gave up his freedom. He allowed no one but Eorl to ride him, and he wore no bit or bridle.

In 2510, Eorl rode Felarof to the aid of Gondor at the Battle of the Field of Celebrant. Afterwards, the Eotheod were given the land of Rohan and Eorl became the first King. Felarof had the life-span of a Man. He was buried in the mound of Eorl, who died in battle in 2545.

Felarof's descendants, the mearas, were magnificent, long-lived horses. The most famous of these was Shadowfax.

This is the 14th release in the Gold Status Fellowship club and was August 2006's Winning idea. It was suggested by Ian Heath. Measures 63mm X 63mm approximately.