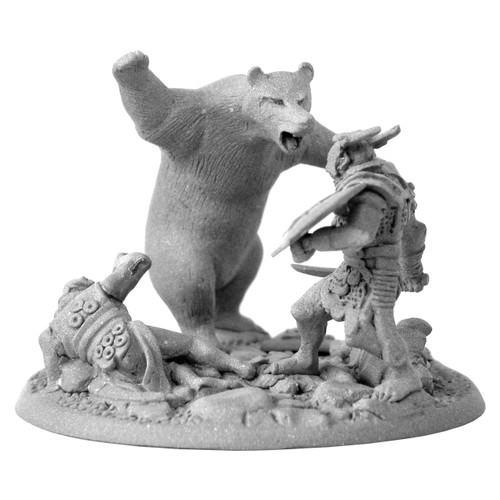 The Battle of the Five Armies™ was waged between the Goblins and the Wargs against Men, Elves, and Dwarves on and near the Lonely Mountain, after Bard the Bowman killed the dragon Smaug. The Hobbit Bilbo Baggins, Gandalf, Beorn, huge bats out of Mirkwood, and the great Eagles also took part but are not included in the count of five armies. Prior to the battle, the Men of the Lake and the Wood-elves had laid siege to the Dwarves in the Lonely Mountain, when the 13 Dwarves in Erebor under Thorin II Oakenshield refused to share any of the treasure they had recaptured from Smaug.

Thorin's company was then trapped in a bloodless siege, with Thranduil and Bard hoping to wait him out. However, Thorin had sent messages of his plight to his relatives using talking messenger Ravens that lived on the Lonely Mountain. These reached Dain II Ironfoot of the nearby Iron Hills, and he marched to Erebor with 500 heavily armed Dwarves, most skilled veterans of the War of the Dwarves and Orcs.

When Dain's forces arrived, battle was almost joined between the two sides (now three armies were on the field) but at the last moment Gandalf intervened between the two and revealed that while they were bickering amongst themselves, the Orcs of the Misty Mountains and Grey Mountains under Bolg were using the opportunity to march against them.

Soon the Orcs and Wargs arrived (and now five armies were on the field), and they were lured into the choke point by a thin line of men of the Lake Town and took heavy loses. However, due to their superior numbers, the allied Free Folk did not hold the advantage long. The second wave was even worse than the first, and now many Orcs scaled the mountain from the opposite side, and began to attack the arrayed forces from above and behind, as the main wave pressed forward. As the battle was turning fully against the Free Folk, a large force of Giant Eagles of the Misty Mountains arrived, led by the Lord of the Eagles. Bilbo was the first to spot their entrance on the scene and began shouting that "the Eagles are coming!", a shout that was then continued among the other troops of the Free Folk. At this point Bilbo was knocked in the head by a large stone thrown by an Orc from above on the Mountain, and he passed out.

With the support of the Giant Eagles, the battle turned back against the Orcs. Then Beorn himself arrived at the battle, apparently having heard news that a large army of Orcs was on the move. This time he did not appear in his former shape of a giant Man, but had changed his skin to that of a gigantic Bear. Beorn drove through the Orc lines, but paused to carry the wounded Thorin out of the battle with his paw. Beorn then returned to the battle with even greater wrath and smashed the ranks of the Bodyguard of Bolg, ultimately killing Bolg himself. The Orcs eventually panicked and scattered, to be picked off by hunting forces from the victors later.

This is the 11th release in the Gold Status Fellowship club and was May 2006's Winning idea. It was suggested by 'voivalvatti'.

Base measures 58 X 58mm and it is about 45mm from bottom of base to Beorn's raised claw. It is in 9 pieces and so does require some assembly.