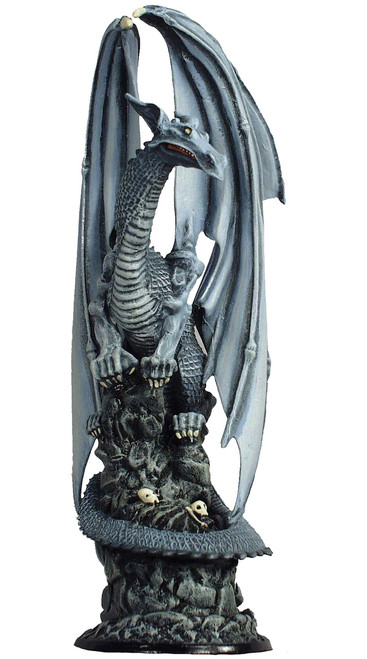 One of the oldest breeds of Dragons in Middle-earth, the Cold-drake became extremely scarce by the end of the Third-age.

The earliest of the Dragons first apeared in the dim past of the First-age and were a manifestation of Morgoth's hatred for the works of the Valar.

The first of the dragons were flightless and had no fiery breath. Over the ages some evolved differently, developing the ability to breath fire as in the the case of Glaurung, whose descendants included true Fire-dragons who could both breath fire and fly, such as Scatha and Smaug.

Antique Finished pieces are first polished and then coated with a black undercoat and that is gently and skillfully rubbed off the highlights and left in the hollows of the statue giving it a strong relief finish that is truly breathtaking.

Designed by Chris Tubb, our internationally famous miniature designer with over 20 years experience in creating Lord of the Rings figures.

This beautifully painted statue is made of pewter and skillfully painted by experienced Irish artists here in Cork, Ireland.

An excellent choice for a gift for any Fantasy collector, or lover of the exotic. Certainly a treasure that will be cherished over the years to come.