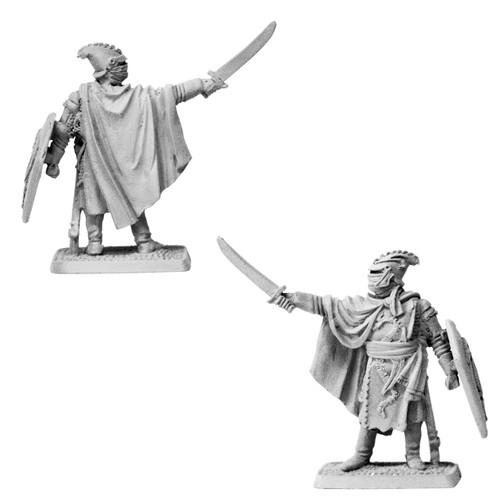 Sangarunya was born of Númenórean stock in Umbar, but his family did not reside long there. During the persecution of the priests of the Dark Worship, Ranculir, the High Priest and Sangarunya's father, was slain. Sazariel, his mother, fled the Haven of the Corsairs with her small son for Ny Chennacatt. She raised him to be loyal to her dead husband's Lord and Master, Sauron of Mordor.

Within the Storm King's court, as a young man of good lineage and maturing prowess at arms, Sangarunya readily attracted the Ulair's attention. The Nazgûl developed plans for his subject, involving the military objectives of the southwest. Almost before he was truly at home within the ranks of the army as a mere captain, Sangarunya was appointed to post of Warlord.
His subsequent victories fully justified the unprecedented promotion. Traveling lightly, Sangarunya wears the magic mail and the dragon-emblazoned, red surcoat characteristic of the mighty of Akhôrahil's forces.

His red, leather faced shield bears the same symbol, he wields a Haradrian scimitar as weapon and his silver-gold helmet is of the karma design. He is an implacable foe and a brilliant strategist.

This is the 104th release in the Gold Status Fellowship club and was April 2014's Winning idea. It was suggested by 'Halbarad II. - H. Wolf'. Measures 40mm in height from base to tip of sword.