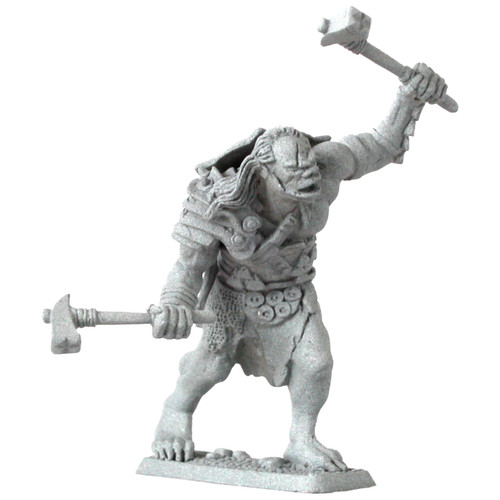 Toward the end of the Third Age, it was believed that Sauron created a different bred of Trolls, seen among the trees of the southern Mirkwood and the borders of Mordor. Even prior to Frodo's departure, it was rumored that "Trolls were abroad, no longer dull-witted, but cunning and armed with dreadful weapons" (FotR, Book 1, Chapter 2)

These trolls were considered stronger and superior to other trolls in almost every way "Olag-hai they were called in the Black Speech. That Sauron bred them none doubted...Trolls they were, but filled with the evil will of their master: a fell race, strong, agile, fierce and cunning, but harder than stone. Unlike the older race of the Twilight they could endure the Sun, so long as the will of Sauron held sway over them. They spoke little, and the only tongue that they knew was the Black Speech of Barad-dur"
(RotK, Appendix F)

The Olag-hai were feared and rightly so, armed with fangs and stone-scaled as others of the Troll race, they carried shields, round and huge and swung mighty hammers. Utilized in battles, they participated in the march with the hosts of Mordor in the Battle of the Pelenor Field, and also were involved in the battle on the Field of Cormallen before the Morannon - "But through them there came striding up, roaring like beasts, a great company of hill-trolls out of Gorgoroth. Taller and broader than Men they were, and they were clad only in close-fitting mesh of horny scales, or maybe it that was their hideous hide; but they bore round bucklers huge and black and wielded heavy hammers in their knotted hands..."
(RotK, Chapter 10, The Black Gate Opens)

Jason Gorda commissioned this Designer Troll and worked with Chris Tubb in finalising the details, pose and accessories. We have ONLY 100 of these miniatures available to sell.

It is primed in Mithril's special paint, and will need some assembly. Glue is not included.

He lives in Toronto, Canada .
"I stumbled upon mithrils back in 2001 on ebay when I was looking for older printings of the book the Hobbit, loved the figures, went to the Mithril website and have been hooked ever since. Most of my friends and my girlfriend think I am nuts - but alas none of them are Tolkien fans like me..or have the collecting bug - but other then a few swords I have picked up over the years, Mithril figurines are the only serious collection hobby I have. Visited the factory in 2003 and met most of the staff, but missed Chris - very memorable experience as I was picked up at the bus drop off in Macroom by Marjorie, given a tour of the countryside , then off to the factory where I was given a very warm reception.

The Hobbit is one of my favourite books, with Lord of the Rings close behind, have read all numerous times, in the range of 10 - 15 times. Am an avid fantasy reader - it is my escape from the troubled world we live in.

I have not painted any of the figures yet, but plan to one day.

The qualities that drew me to the figures the most was the great attention to detail, I still cannot comprehend how Chris is able to create these detailed figures - as any Mithril collector will agree, he has an unbelievable gift."

DIMENSIONS: 60mm height from base to tip of warhammer. There is a shield variant.