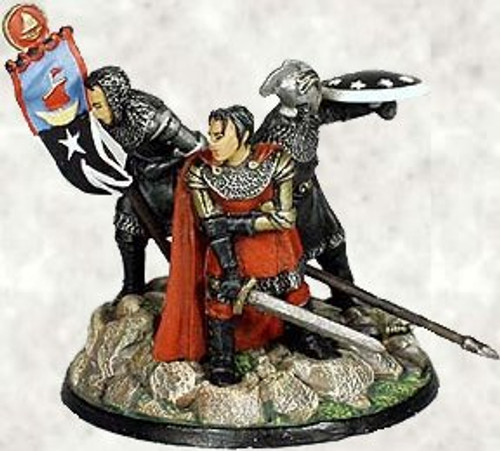 Isildur was a Dúnadan of Númenor, elder son of Elendil. During the final battle on the slopes of Mount Doom, Elendil and Gil-galad were both slain in combat with the Dark Lord, but Sauron's mortal form was slain as well. Isildur took the hilt-shard of his father's sword Narsil, which had broken beneath Elendil when he fell, and cut the One Ring from Sauron's hand; causing Sauron's malignant spirit to flee.

Despite the urging of Elrond and Círdan, Gil-galad's lieutenants, Isildur did not throw the Ring into the fires of Mount Doom; Instead, he claimed it as an heirloom for his House, and as weregild for the deaths of his father and brother.
At the Gladden Fields, Isildur's party was ambushed by roaming Orcs of the Misty Mountains.
Isildur, realizing his mistake in keeping the Ring and attempting to return it to the holders of the three, put on the Ring, hoping to escape under the cover of invisibility. Fleeing to the Anduin, he cast off his armour and tried to swim to the other side of the river, but the Ring slipped (of its own volition) from his finger. He was quickly overpowered by the Anduin's current, and so the Ring abandoned him. Isildur felt the Ring was missing and was compelled to give in to the river and drown, resigning his life at the loss of the Ring. Despite the darkness, the Elendilmir that he was wearing gave his position away to the Orcs on the far bank who were seeking survivors from the attack, and they killed him with their poisoned arrows.