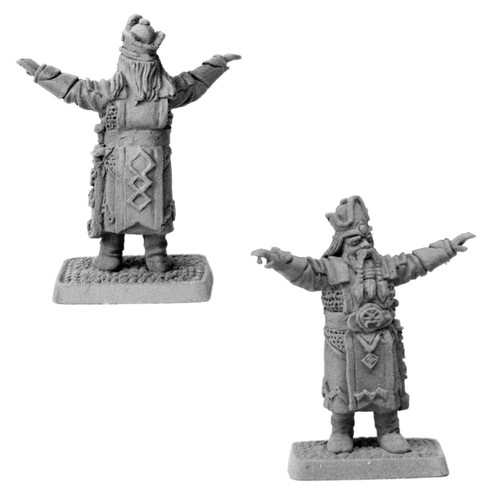 Balin was of noble birth and served as an important retainer to the kings under the mountain. When Erebor had fallen he accompanied king Thrain on his wanderings until the latter was captured and imprisoned in Dol Guldur. He was also part of Thorin Oakenshield’s successful expedition to re-capture the Dwarven kingdom of Erebor from the dragon Smaug. Some years later his restless spirit prompted him to lead a party of Dwarves in an attempt to re-take the ancient stronghold of Moria. The plan was successful for a while and this figure shows Balin in his lordly regalia addresses his Dwarven followers after the re-capture of Moria. However, the pressure of their enemies became too great on the little colony and the kingdom of Balin was eventually wiped out.

This is the 102nd release in the Gold Status Fellowship club and was March 2014's Winning idea. It was suggested by 'Khador'. Measures 32mm in height from base to top of helmet.