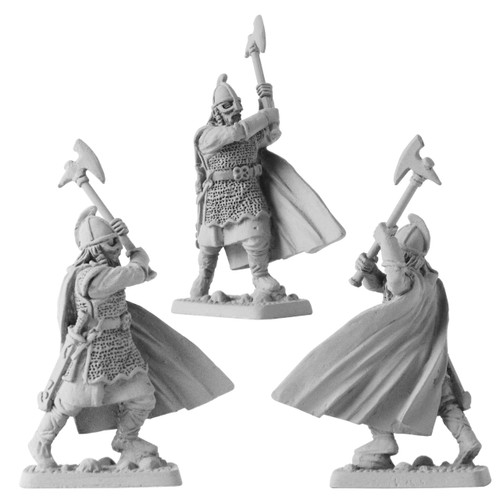 He was the Lord of Harrowdale and the nephew of Erkenbrand. He survived the battle at the Fords of Isen, but fell in the battle of Pelennor Fields, to the great grief of Westfold.
He is mentioned by name three times in The Return of the King.

"So the King of the Mark came back victorious out of the West to Dunharrow beneath the feet of the White Mountains. There he found the remaining strength of his people already assembled; for as soon as his coming was known, captains rode to meet him at the ford, bearing messages from Gandalf. Dunhere, chieftain of the folk of Harrowdale was at their head." ROTK p. 79
"there at a small table sat Théoden with Eomer and Eowyn, and Dunhere lord of Harrowdale" ROTK p. 83
Dunhere is also mentioned in the song "The Mounds of Mundburg" ROTK p. 152.

Dimensions: 49mm in height from base to top of axe.
Total weight of metal figure is 22 grams.

This is the 100th release in the new Gold Status Fellowship club. This is January 2014's Winning idea. It was suggested by 'Shadyt'.