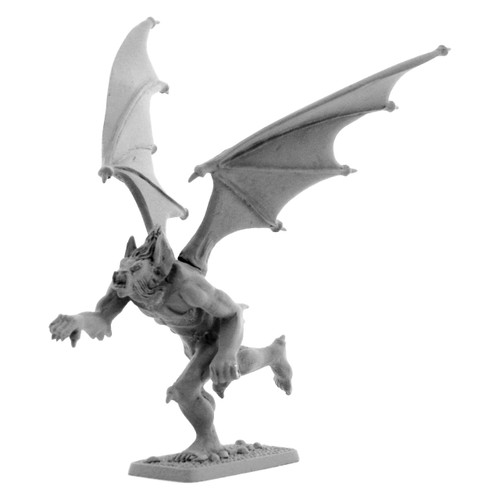 Related to Balrogs, but smaller in stature, these creatures lived in the deserts of Far-Harad.
This is only the second time Mithril has ever produced a Razarac. The first one was M78. This is a MERP creation.

From I.C.E. Sourcebook Creatures of Middle-Earth:
Based on J.R.R. Tolkien's The Lord of the Rings.

The demonic Razarac is the most terrible monster in Far Harad, the most awful denizen of the Haradwaith. Known as "The Destroyer" by the Haradrim, it is a powerful, gruesome holdover from the armies of Morgoth in the elder days. Legends say that the Razarac was placed under the stone of the Ogladalo Vatra when the desert was formed, to prevent the water from being returned to the surface.
However, in recent years Men have broken the seals to those deep caverns and now this terror prowls the night under the open sky.

Physically, the beast is shaped like a Great Mountain Troll. Its hide is thick, tough, and coarse, giving it the protection of plate armour. For combat, it is armed with fierce talons hand and foot, as well as fangs set into huge and powerful jaws. From the massive shoulders spread leathery wings which, though they will not carry the monster on long journeys, will allow extended leaps of up to 200 yards.

Dimensions: 85mm in height from base to top of wing tip.
Total weight of metal figure are 70 grams. This figure is blister packed and unprimed. Assembly is required. There are 5 parts, a body, two wings and two limbs.

This is the 94th release in the new Gold Status Fellowship club. This is May 2013's Winning idea. It was suggested by 'Halbarad II. - H. Wolf'.