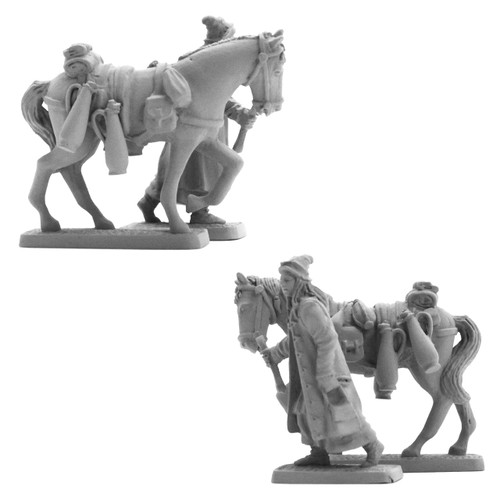 Lying on the north-western shores of the sea of Rhun, the land of Dorwinion forms the eastern marches of the great plain of Rhovanion. It is a country famous for its wines, which are traded far and wide across the region. Much of its produce is shipped to Esgaroth and is also highly prized by the Elves of Mirkwood. Dorwinion's Sagathic neighbours must also appreciate its wines and they are doubtless enjoyed in many a chieftain's hall.

This figure represents one of those Dorwinrim merchants who ply their wares across Rhun and Rhovanion. This woman has a small pony which is laden with jars which contain samples of her wine varieties. She is dressed in a style which is an amalgam of the Northmen costume style of Esgaroth, and that of the Easterling peoples of the Rhun are.

This is the 69th release in the Gold Status Fellowship club and was May 2011's Winning idea. It was suggested by 'twrich'. Figure measures 33mm in height from bottom of base to the top of the merchant's head.