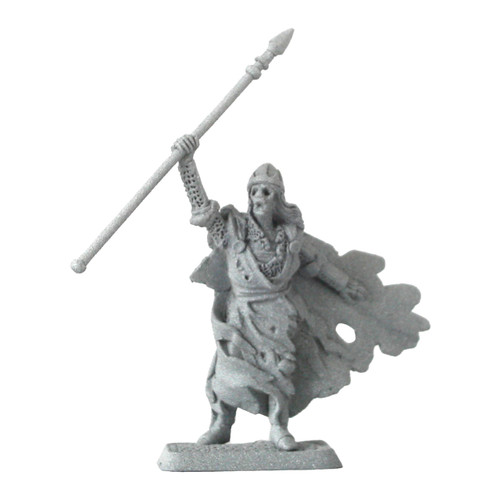 '..Elrohir gave to Aragorn a silver horn, and he blew upon it; and it seemed to those that stood near that they heard a sound of answering horns, as if it was an echo in deep caves far away. No other sound they heard, and yet they were aware of a great host gathered all about the hill on which they stood; and a chill wind like the breath of ghosts came down from the mountains. But Aragorn discounted, and standing by the Stone he cried in a great voice:

"Oathbreakers, why have ye come?"

and a voice was heard out of the night that answered him, as if from far away:

"To fulfil our oath and have peace".

Then Aragorn said: "the hour is come at last. Now I go to Pelargir upon Anduin, and ye shall come after me. And when all this land is clean of the servants of Sauron, I will hold the oath fulfilled, and ye shall have peace and depart forever. For I am Elessar, Isildur's heir of Gondor."...('The Passing of the Grey Company' from the Return of the King.)

....men of Lamedon contested the fords with fell folk of Umbar and Harad who sailed up the river. But defenders and foes alike gave up the battle and fled when we came, crying out that the King of the Dead was upon them....

...and thereupon the King of the Dead stood out before the host and broke his spear and cast it down. Then he bowed low and turned away; and swiftly the whole grey host drew on and vanished like a mist that is driven back by a sudden wind....('The Last Debate' from The Return of the King)

'Over the land there lies a long shadow,
westward reaching wings of darkness.
The Tower trembles; to the tombs of kings
doom approaches. The Dead awaken;
for the hour is come for the oathbreakers:
at the Stone of Erech they shall stand again
and hear there a horn in the hills ringing.
Whose shall the horn be? Who shall call them
from the grey twilight, the forgotten people?
The heir of him to whom the oath they swore.
From the North shall he come, need shall drive him:
he shall pass the Door to the Paths of the Dead.'

(spoke Malbeth the Seer, in the days of Arvedai, the last King of Fornost).

Dimensions: King of the Dead is 51mm in height from base to tip of the spear.

This is the 5th release in the Gold Status Fellowship club and was November 2005's Winning idea. This MS439 miniature was suggested by Philip Hurton (a.k.a. narmacill).