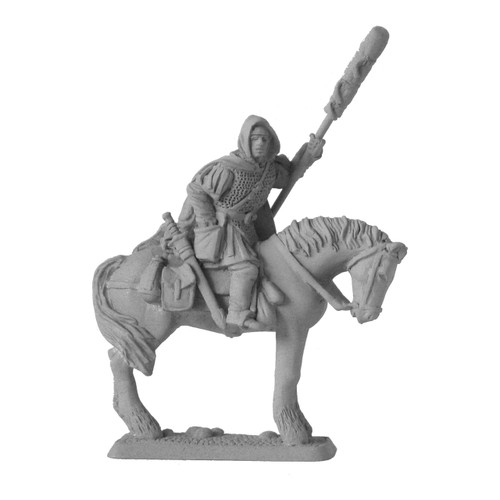 Halbarad first appears in 'The passing of the Grey Company' section of the Lord of the Rings. Aragorn and some of his friends started out towards Minas Tirith with Theoden and Eomer. As they passed the Fords of Isen they were approached by horsemen. One dismounted and introduced himself, 'Halbarad Dunadan, Ranger of the North am I'. He was seeking Aragorn. Aragorn asked 'What is that you bear, Kinsman?' For he saw that instead of a spear he bore a tall staff, as it were a standard, but it was close-furled in a black cloth bound about with many tongs.

'It is a gift that I bring you from the Lady of Rivendell,' answered Halbarad. 'She wrought it in secret, and long was the making. But she also sends words to you: "The days are short. Either our hope cometh, or all hope end. Therefore I send thee what I have made for thee. Fare well, Elfstone!"

And Aragorn said: 'Now I know what you bear. Bear it still for me a while!'.

Dimensions: Halbarad is 65mm in height from base to tip of staff/standard.

This is the 3rd release in the Gold Status Fellowship club and was September 2005's Winning idea. It was suggested by Wendy Rafalski.