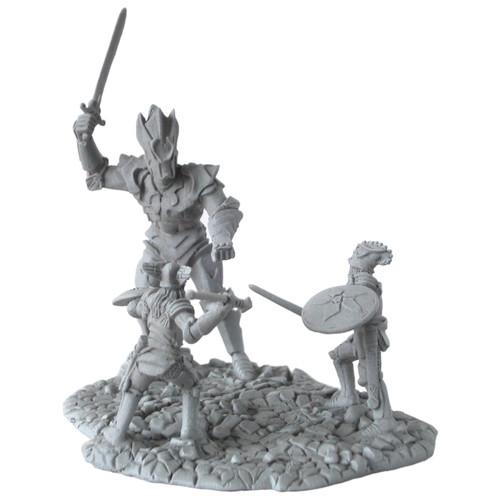 This MS435 vignette depicts the final act in the war of the Last Alliance. After seven long years of siege, Sauron finally emerged onto the ashen plain of Gorgoroth to confront Elendil, lord of the realms in exile, and Gil-galad of the great Elven house of Finwe. Sauron is armed with a great-sword and on his left hand wears a gauntlet of metal plates and black dragon skin. Elendil wears the Numenorean Karma helmet, and has an emblem depicting the island of the Star upon his breastplate. He wields the sword Narsil, which will finally deal a mortal blow to the Dark-lord. Gil-galad wears plate armour forged by Noldo craftsmen and carries his great spear Aeglos.

Dimensions: Sauron is 75mm in height from vignette base to tip of raised sword. The base is about 75mm in length.

This is the 2nd release in the Gold Status Fellowship club and was August 2005's Winning idea.