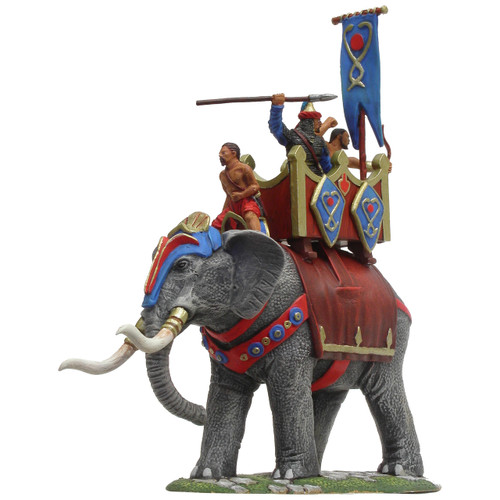 Mumaks are literal battle platforms for the dreaded Southrons, huge elephants that carry war towers on their backs and crush or gore all opposition underfoot. Triple thick hides make them arrow-proof and they can hurl trees and rocks at their enemies. Nothing stands in their way and lives. Sam referred to the Mumak as a Oliphaunt and recalled a lovely poem about them.

" Grey as a mouse,
Big as a house,
Nose like a snake,
I make the earth shake,
As I tramp through the grass;
Trees crack as I pass.
With horns in my mouth,
I walk in the South,
Flapping big ears,
Beyond count of years,
I stump round and round,
Never lie on the ground,
Not even to die.
Oliphaunt am I,
Biggest of all,
Huge, old, and tall.
If ever you'd met me,
You wouldn't forget me.
If you never do,
You won't think I'm true;
But Oliphaunt am I,
And I never lie."

Our Mumak is easy to assemble with a comprehensive guide included. Requires glue (not included).

The Boxed Set include a Southron Archer, Spearman and Mumak Handler. All to exact scale. The heaviest boxed set we have EVER released - about 800 g of pure metal. No cheap plastic parts!.

Realistic Middle-earth creature influenced by the description in 'The Two Towers' book from the Lord of the Rings series.

"A grey clad moving hill ... Legs like trees, enormous sail-like ears spead out ... His upturned hornlike tusks were bound with bands of gold...his trapping of scarlet and gold..."