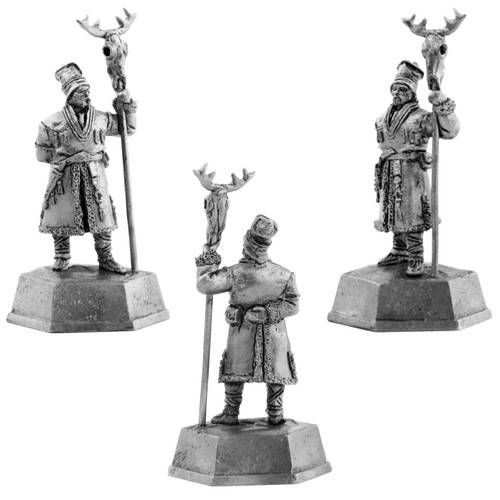 In the cold north of Middle-earth, between the northern foothills of the Ered Luin to the  west and the northern extremities of the Hithaeglir to the east, lies the great ice-bay of Forochel. Snowbound and unforgiving in climate it is the western end of the great Forodwaith, those frozen wastes which lie to the far north of Middle-earth. Around the Ice-bay live the Snow-men or Lossoth, an isolated people who have little commerce or hospitality with others. They live in snow-houses and make their livings by fishing or hunting on the ice. They are a tribal people governed by their chieftains and Shamans. Common to many northern peoples these Shamans are believed to be in direct contacts with ancestor spirits who guidance is sought by the people and whose word is often law.

This was a 32mm scale metal miniature, in antique finish, released for Christmas 2014.