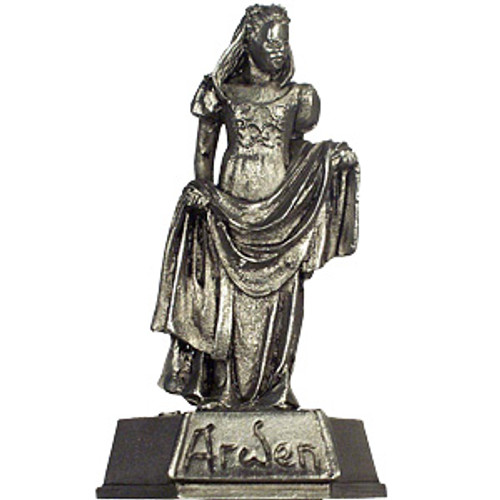 Arwen Evenstar was the daughter of the Elf-lord Elrond. She was beautiful with dark hair and grey eyes and she was called Undomiel, the Evenstar of her people. Arwen's beauty was compared to that of Luthien, and like Luthien, Arwen chose to forsake her immortality for the love of a mortal Man. After the War of the Ring, Arwen wed Aragorn, King Elessar, and became Queen of the Reunited Kingdom.

Arwen and Aragorn lived happily together for 120 years. They had a son, Eldarion, as well as daughters. In the year 15 of the Fourth Age, the King and Queen travelled to the North-kingdom. Arwen bound the Elendilmir on Aragorn's brow when he assumed full kingship of Arnor. They dwelled for a time by Lake Evendim and they went to the Brandywine Bridge to meet with Sam Gamgee, Merry Brandybuck, and Pippin Took. Arwen made Sam's daughter Elanor her maid of honor.