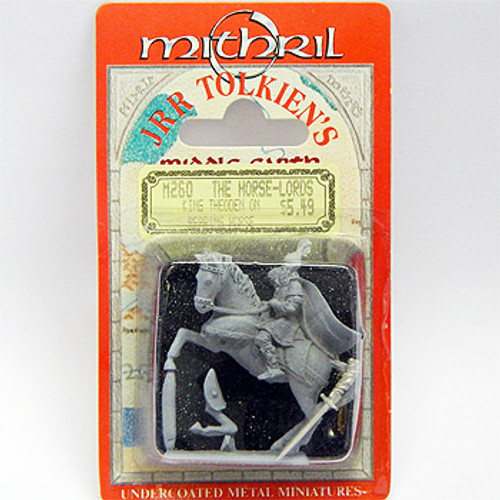 Theoden, Thengel's son, had reigned as king of the Mark for almost 40 years before the War of the Ring. For much of that time he ruled well, but during the latter part of his reign became prone to a melancholy which deepened as time went on. The deaths of both his wife and his beloved sister Theodwyn had started his decline into a state of torpor, a state made still worse by the evil councils of Grima Wormtounge, a creature of Saruman.

When Theoden's son was slain in battle, Grima made every effort to alienate him from his new heir Eomer, who was seen as a threat to the plans of Saruman. Grima's plans were, however, thwarted, for the timely arrival of Gandalf and Aragorn at Meduseld not only ended the Wormtoungue's influence but spurred Theoden himself to action. He summoned the riders of Rohan and despite his age led the Rohirrim eastward to the aid of Gondor. Theoden's army won a great victory over the Haradrim at Pelennor fields through Theoden himself perished in battle at the hands of the lord of the Nazgul.
Blister design and condition may vary as this is old stock. Old prices printed on labels are removed in the photos to avoid confusion.