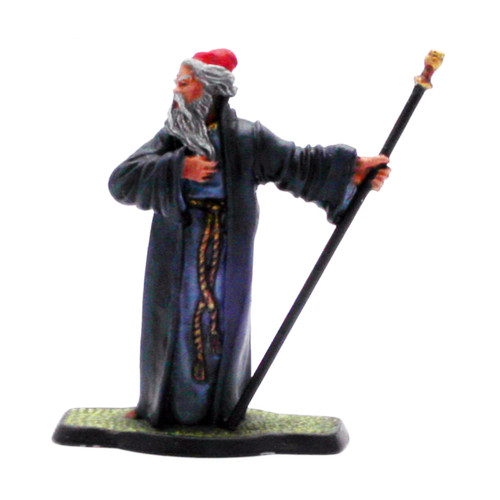 The Blue Wizards were members of the Order of Wizards, the Istari. They are not human and came to Middle-earth to protect and guide the races from the influence of evil, most notably Sauron. However we know little about these other wizards from the books of J.R.R. Tolkien or their impact on the events that occured during the War of the Ring.

The Painting Guide:
This miniature will benefit from an initial base coat of blue/grey. The main focus of the figure rests with the head, shoulders and leading arm, and it is these areas which need highlighting most.

Different areas of clothing may be treated with a selection of blues. Keeping to mid-tones will be the best as they will be enhanced by a wash of black or blue/black and later by highlighting when the wash has dried. Getting large areas of wash done in the first stages is recommended as doing them later runs a risk of watery paint bleeding onto carefully painted areas.

Deep tones of blue will need little highlight but a more subtle shade requires more careful treatment. These areas may be lightened to a mix of blue/white if desired, but keeping away from pure white adds to the natural look in miniature painting.

Skin tones are best starting from a brick red through progressively lighter tones up to a cream or bone colour for the prominent areas of the face. Keeping the paint mixed with a small amount of water will ensure a smooth finish in the final stages. The wizard's black beard may be treated either by a wash of black over grey or a light drybrush of grey over black or a combination of both techniques.

MM500 Lord of the Rings 'Gandalf™ on the bridge of Khazad-dum™' 32mm Scale Metal Miniature.