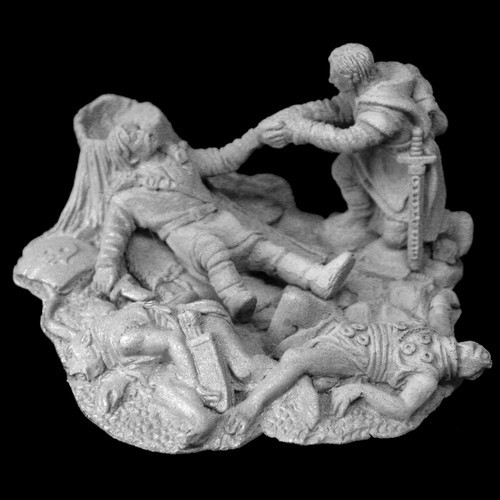 As you know Boromir's body is described in LotR as shot through with arrows. But due to the technical difficulties involved in the casting of such thin items , I have decided to omit them. Should anyone wish to make arrrows for the vignette, both in Boromir's body and on the ground, I recommend the following method.

Take a length of standard telephone wire and strip off the outer plastic casing with a plier.The exposed copper-wire is approx. 0.5mm in diameter. Take a plier and squeeze flat about 1.5 mm of the end of the wire. Add a small ammount of milliput to this flattened area to make the flight. Shape the flight and when dry, cut off the wire to a length of about 8mm. repeat the process for the number of arrows required. - Chris Tubb