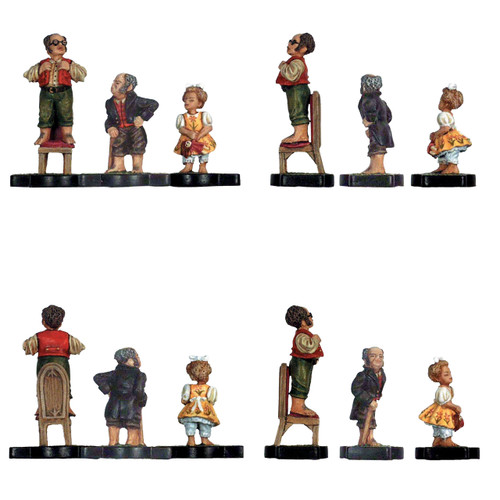 Bilbo the Hobbit had a birthday party to celebrate his "eleventy-one years" (and also Frodo's birthday) and had invited one hundred and forty-four guests. As was traditional he gave a speech at the end of the meal, using some humor as well as clever and thinly veiled insults in his address to the Hobbits (aimed at the Sackville-Bagginses). At the end of it he used the One Ring to disappear in front of his audience with his final words being "..eleventy-one years is far too short a time to spend among you — this is the END. I am going. I am leaving NOW. GOOD-BYE!".

It is best to paint the Bilbo figure in its component parts, and then assemble the figure once the painting is complete.

Our painter has chosen to give Bilbo a scarlet 909 waistcoat with wash of 926 then highlighted with 910. His waistcoat was recorded as embroidered, you could choose to give it a pattern if you like. The only other details recorded were that it had gold buttons. The buttons are given an effect of depth by first painting a black dot, and then adding a slightly smaller gold dot for form the button. The black gives the effect of a shadow. His shirt has been given a natural look by using 819 with a very light wash of 875 and then dry brushed with 819 and highlighted with 951. Giving the effect of a natural unbleached fabric. His trousers are given a coat of 881 and then a wash of a darker green 823. The chair is given a wood effect by using 977 and then painting in a darker grain with 875 and a light wash of 875 and lightly highlighted with 819.

It would be safe to assume that Bilbo's guests would be dressed in their best party clothes. This hobbit child is given a yellow 953 dress and highlighted with a mixture of 951 and then given a flower design. The design was made up of single strokes, 881 for the flower stem and 803 for the flower, to give a subtle but pretty effect. Designs using trees and leaf patterns would also be suitable, polka-dotting also works and is quick and easy. Children's hair is usually lighter, so this figure is given slightly lighter hair than Bilbo. The rag doll is given a contrasting colour, it may have been one of Bilbo's presents, so could have been of real dwarfish make which, would have been highly patterned. Her sleeves are painted white 951 and then a light wash of 837 to give depth to the folds.

The bases are finished with Green 890x, and dry brushed with yellow, to give the effect of grass.