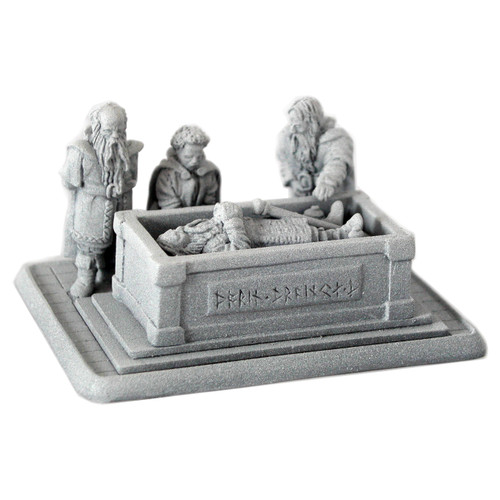 'Thorin Oakenshield, son of Thrain, son of Thror' is the rightful heir to the Dwarven stronghold of the Lonely Mountain, driven into exile by the depredations of the dragon Smaug. Thorin, it seems, wants little more than to claim his rightful place as 'King under the mountain,' and to liberate the halls of his ancestors from the clutches of the dragon.

But this is also the source of Thorin's major flaw, it is one thing that dominates his each and every action. Thorin's pride and determination to have his realm and title back is best summed up by comparison to his attempts to recover the gem known as the 'Arkenstone', an heirloom of his line. Thorin will stop at nothing to find the stone.

But it is in the end found by Bilbo, who decides that he should keep it a while and eventually he uses it as a bargaining chip against Thorin who, out of stubborn pride, refuses to allow a portion of the dragon's hoard to be given to the men of Laketown and the Elves of Mirkwood from whom the wyrm stole much (mainly due to the fact that he has not found the Arkenstone among the hoard). Slain in the final battle, Thorin is buried clutching the Arkenstone which is returned to the dwarves by Bilbo, holding in death what his stubborn nature denied him in life.

This is the 9th release in the Gold Status Fellowship club and was March 2006's Winning idea. It was suggested by 'Ori'.