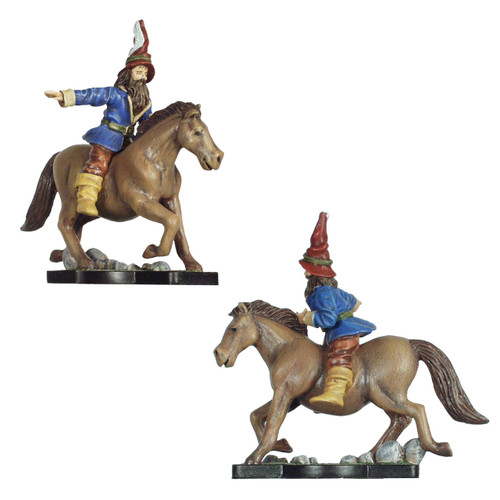 It is probably best to assemble both figures but leave Tom and Fatty separate and then assemble them once the painting is finished.

Our painter chose to use flat flesh 955 for face and hands, but as his face is described as red as a ripe apple but creased into a hundred wrinkles of laughter, you could choose a bolder colour. His eyes and mouth are picked out using 818 and don't forget his blue eyes! His hands are described as "big brown skinned hands" so you could choose a darker colour for these.

When Tom first appeared they could see his "old battered hat with a tall crown and a long blue feather stuck in the band." Tom is described as having yellow boots on his thick legs.

Toms bright blue jacket is first given a coat of 839 that is then considerably toned down using a wash of 807 with very slight highlights of 901. His belt is first painted yellow green 881 and then highlighted with 881. Our painter made the lining of his jacket light buff using 837 mixed with a little white. Toms hair is first painted with burnt umber 941 and then dry brushed with 983. His trousers are first given a coat of red leather 981 washed with 985. Fatty Lumpkin is given a basic coat of light brown 874 and then his folds darkened with 983 finishing with the darkest areas given a slight touch of a hull red 985. His main and tail are then coated with bunt umber 941 and then dry brushed with a slightly lighter brown 875. His mouth, eyes and nostril are painted 985.

The rocks on the base painted with 877 a strong wash of 955 with highlights added with a touch of 990 and given a dry brushing of 820, the grass is painted with Green 890, and dry brushed with yellow.