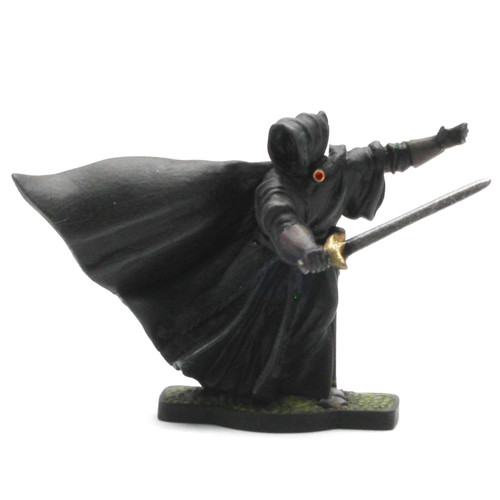 In origin all the nine Nazgul were once great and powerful Lords, ruling many lands in Middle-earth. Each had accepted a ring of power from Sauron: a ring which imbued its wearers with sorcerous abilities and great longevity. Each had used their rings to enhance and expand their kingdoms to even greater limits.

But the power of the rings was bought at a terrible price. For the same ring that imbued its wearer with power and life also increasingly subjected his will to that of the Dark-lord, until after many years the Nine were but cyphers in which the Dark-lord could act out his own wishes. When Sauron perished at the end of the Second-age, the nine, so closely bound up to him, perished also.

When the Dark-lord re-emerged from the shadow in the Third-age, the nine re-appeared also. What lingering mortal qualities they may have still possessed before the destruction were now entirely gone, and they now appeared as the terrible shadow beings, famous in the Third-age as the Ringwraiths.

This figure is no longer available as a single figure:
Due to the popularity of this figure we now only have a limited stock of this figure left. To preserve the number of complete sets we can supply we are now only supplying this figure as part of a set of LR11-20 figures.