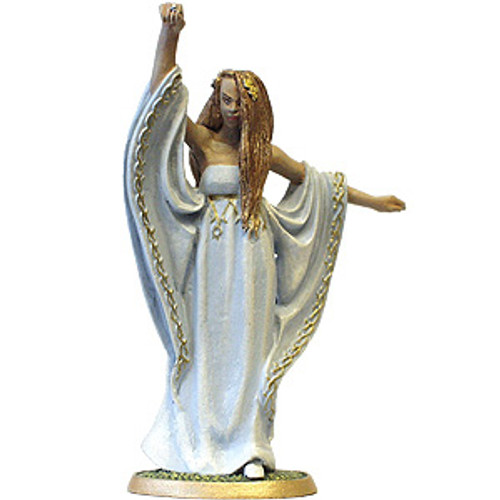 Galadriel, the Lady of the Golden Wood of Lothlorien, was the most powerful Elf in Middle-earth in the Third Age. She had been one of the leaders of the Noldor who left the Undying Lands in defiance of the Valar, and she was the last of them to remain in Middle-earth. Galadriel rejected the chance to take the One Ring and claim power for herself, and at last she was able to return into the West.

Galadriel was incredibly beautiful. Her hair was a magnificent gold touched with silver, and it seemed to shine with the light of the Two Trees of Valinor.

Galadriel resided in Lothlorian and welcomed the Fellowship when they ventured into her domain. Galadriel then tested the resolve of each member of the Fellowship. She looked deeply into their eyes, and they felt as if they were being offered a choice between continuing on the quest or turning aside and receiving something they greatly desired. Galadriel held the Ring-bearer's gaze for a long time, and she saw courage and wisdom in Frodo. Galadriel gave Frodo the chance to look into her Mirror, and she knew that he saw the Eye of Sauron with whom she had long contended.

As the bearer of a Ring of Power herself, Galadriel had a special understanding of Frodo's burden. For his part, Frodo was able to see Nenya on Galadriel's finger. Galadriel told Frodo that if the One Ring were destroyed, the Three Rings might lose their power and all that had been wrought with them would fade.

When the Fellowship left Lothlorien, Galadriel gave gifts to each member of the Fellowship. To Aragorn she gave a green stone called the Elessar, which had been left in her care for him by Arwen. Sam Gamgee received a mallorn seed and a box of earth from her garden, which he later used to heal the damage done to the Shire during the War of the Ring.

Galadriel asked Gimli what he desired, and the Dwarf requested a strand of her hair. Galadriel gave him three strands.

Galadriel prepared a special gift for Frodo. She filled a crystal Phial with water from her Mirror wherein she had captured the light of the star Earendil, which shone with the light of one of the Silmarils.